NBCUniversal has announced that it will be partnering with WWE to develop a new dramatic scripted series about the world of wrestling titled ‘Pinned’.

Vince McMahon himself is set to serve as an executive producer, as well as Kevin Dunn and Chris Kaiser. 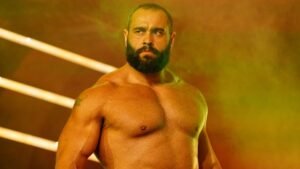 Here is the description for the show:

An adrenalized upstairs-downstairs soap that gives a behind-the-scenes look at a fictional wrestling promotion and the unforgettable characters that populate it. ‘Pinned’ offers a front-row seat into the eccentric wrestling culture and the mayhem that exists between the locker room and the boardroom.

It’s unclear which network will air the show. WWE is currently developing the scripted series “The United States of America vs. Vince McMahon” with Blumhouse Television which is about the steroid trial in 1994 involving McMahon and the company. Just yesterday, it was revealed Noah Harpster and Micah Fitzerman-Blue will write and be the showrunners of the series.

WWE and NBCUniversal have had a working relationship since NBC purchased the rights to the WWE Network for Peacock.