The Bloodline faction, led by Roman Reigns, has established itself one of the most dominant forces in modern WWE history.

The Formation Of The Bloodline

While Roman Reigns would already occasionally team with The Usos, the formation of The Bloodline truly began after Reigns’ WWE return in the summer of 2020.

After making his comeback following the main event of SummerSlam 2020, Reigns won the Universal Championship a week later at the Payback premium live event.

Reigns’ first title defense was against his cousin Jey Uso, who he defeated at that year’s Clash Of Champions event.

The next month, Reigns defeated Jey again in a Hell in a Cell I Quit match that had huge implications. Because Jey lost, he was forced to join forces with the Tribal Chief (Reigns), or be kicked out of the family for good. Reigns actually picked up the victory after attacking Jey’s injured brother Jimmy Uso, with Jey quitting to save his brother. 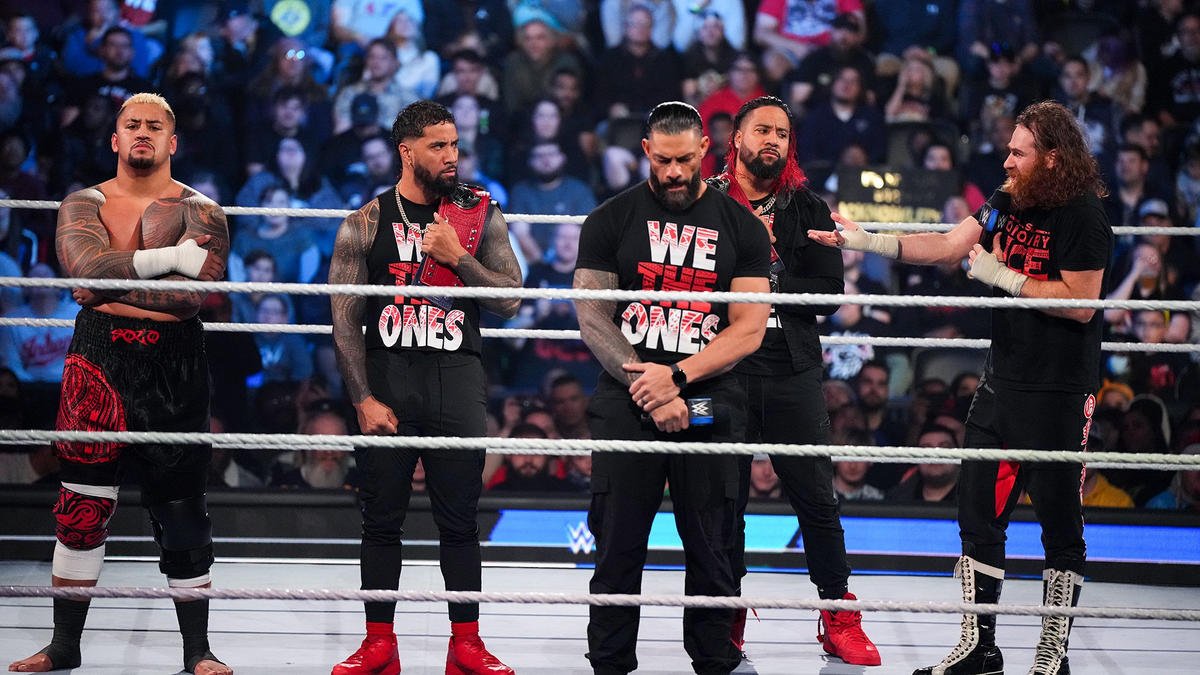 The Bloodline will walk into Survivor Series as a five-man team against the Brawling Brutes, Drew McIntyre & Kevin Owens

Jimmy Uso returned to WWE TV on May 2021. While he didn’t initially approve of Jey’s alliance with Reigns, The Usos became dedicated to the Bloodline over time.

All three men went on to become undisputed champions, with Roman Reigns unifying the WWE and Universal titles at WrestleMania 38 in April 2022, and The Usos defeating RK-Bro to unify the SmackDown and Raw tag titles that May.

Sami Zayn began associating himself with the top faction in May 2022, before eventually becoming an ‘Honorary Uce’ in September. 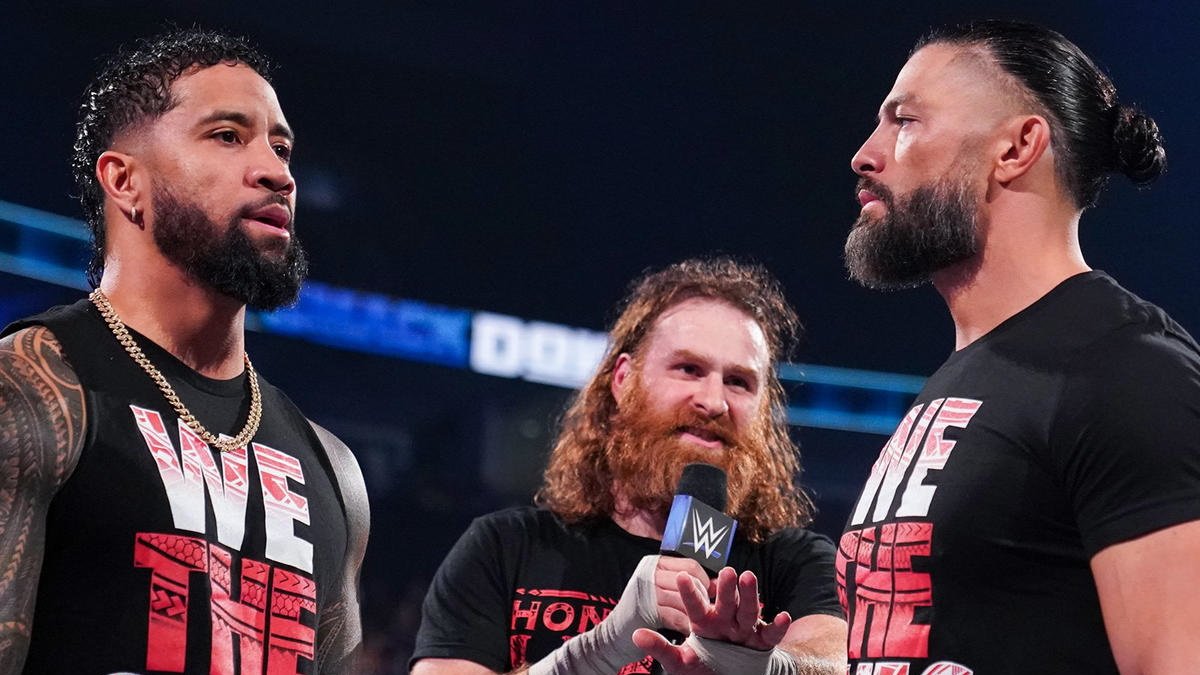 Weeks before Sami Zayn was declared an honorary uce, Solo Sikoa made his main roster debut at the September 4 Clash At The Castle premium live event, helping Roman Reigns to retain his Undisputed WWE Universal Title.

That means The Bloodline is officially made up of Roman Reigns (accompanied by his ‘special counsel’ Paul Heyman, who aligned with Reigns in August 2020 and betrayed his former client Brock Lesnar to pledge allegiance to his ‘Tribal Chief’ in late 2021/early 2022), The Usos, Sami Zayn, and Solo Sikoa.

Roman Reigns, The Leader Of The Bloodline faction

Since his feud with Jey Uso in 2020, Roman Reigns has been referred to as the Tribal Chief. Reigns, real name Leati Joseph Anoa’i, is the son of Leati Sika Amituana’i Anoa’i, better known to wrestling fans as Sika Anoa’i. Sika notably won the WWE (WWF) World Tag Team Championship on three occasions in the 1980s alongside his brother Afa Anoa’i as the Wild Samoans. 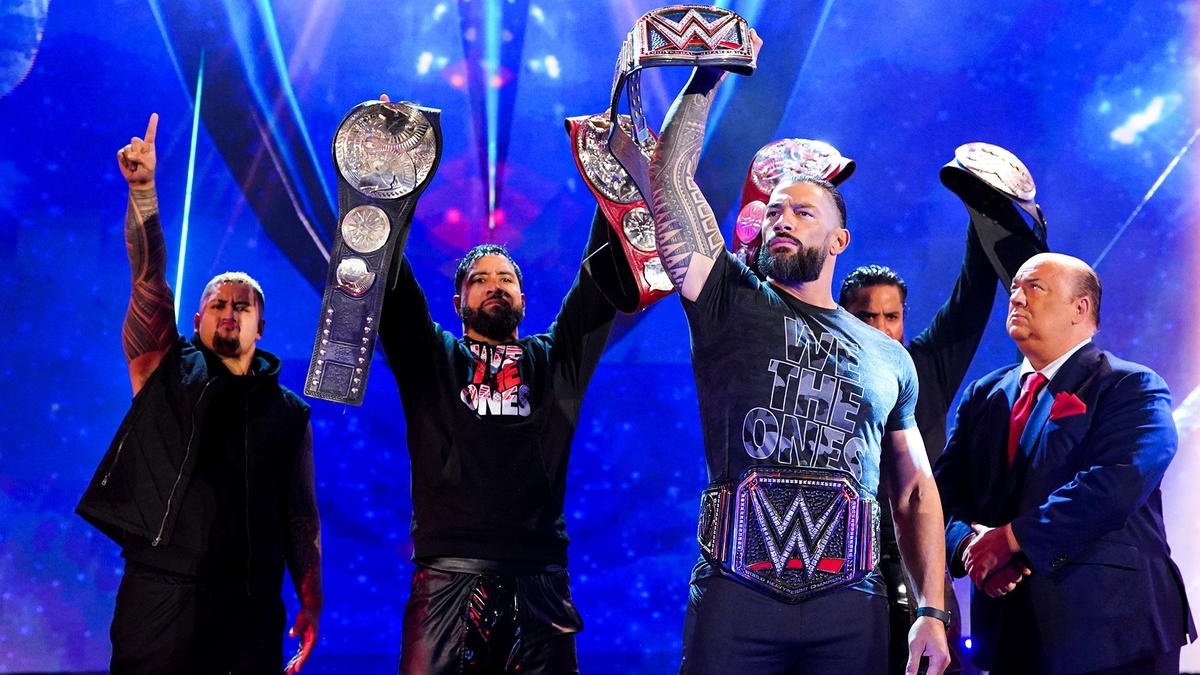 Jimmy and Jey Uso (Jonathan and Joshua Fatu) are the twin sons of Solofa Fatu Jr, better known to wrestling fans as Rikishi. The Hall of Famer was one of the four sons of Elevera Anoaʻi and I’aulualo Folau Solofa Fatu. 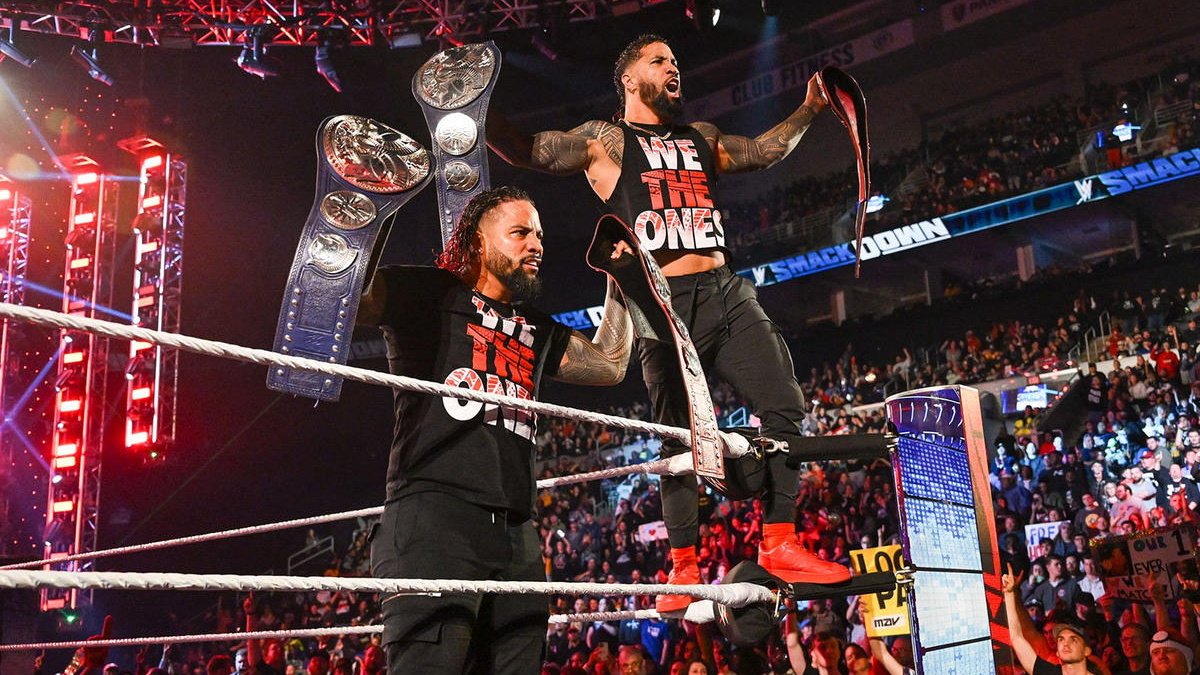 Solo Sikoa’s Connection To The Bloodline

The most recent blood-addition to the Bloodline, Solo Sikoa (Joseph ‘Sefa’ Fatu) is also the son of Rikishi, and the brother of Jimmy & Jey Uso. This means that Roman Reigns and Solo Sikoa are also first cousins, once removed. Sami Zayn’s Connection To The Bloodline

Sami Zayn isn’t actually part of the Anoa’i family by blood. He’s just kinda happy to be there. On the September 23 edition of SmackDown however, Roman Reigns officially named Zayn an ‘honorary uce’.

While ‘uce’ is a slang term for ‘bro’ or ‘brother’, recent Twitter interactions between Sami Zayn and Rikishi have indicated that Zayn is specifically an honorary Uso, or an honorary son of Rikishi at least. 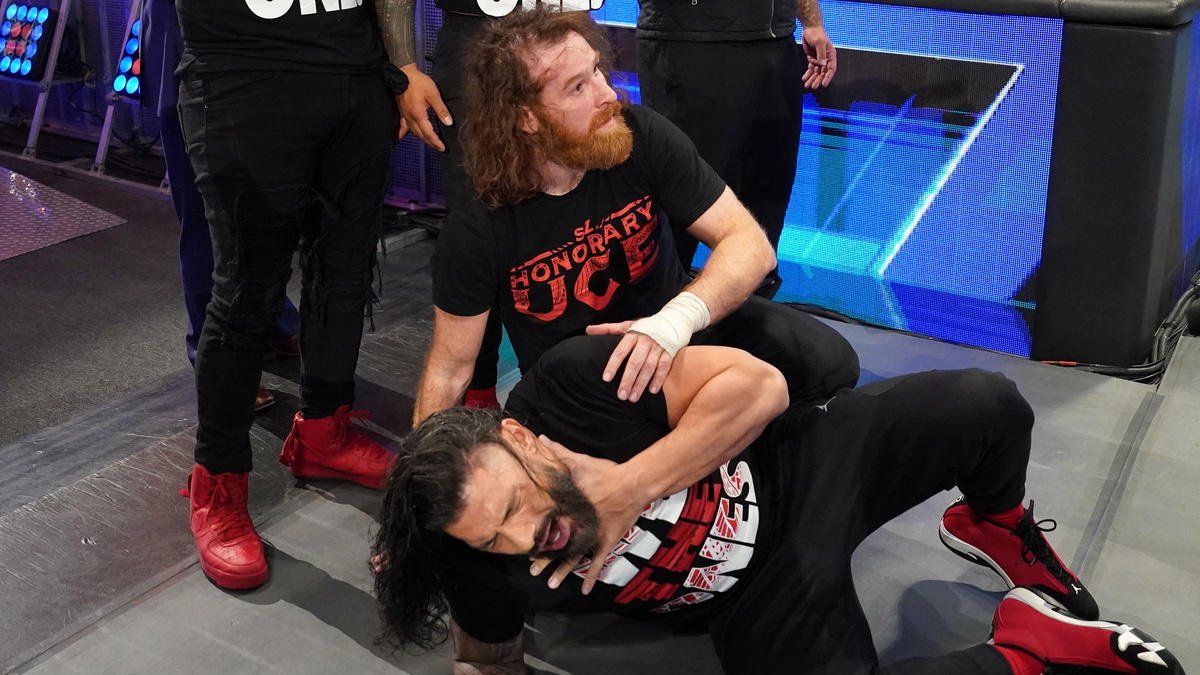 The Rock’s Connection To The Bloodline

Despite WWE previously presenting Dwayne ‘The Rock’ Johnson and Roman Reigns as close family members, the two are not actually related by blood.

Interestingly, the grandfather of The Rock, Fanene Anderson (Peter Maivia), and the grandfather of Roman Reigns, Amituana’i Anoaʻi were blood brothers. The two had performed a ceremony called a ‘blood oath’ to become connected to one another, the idea being that each person’s blood flows through the other’s veins. 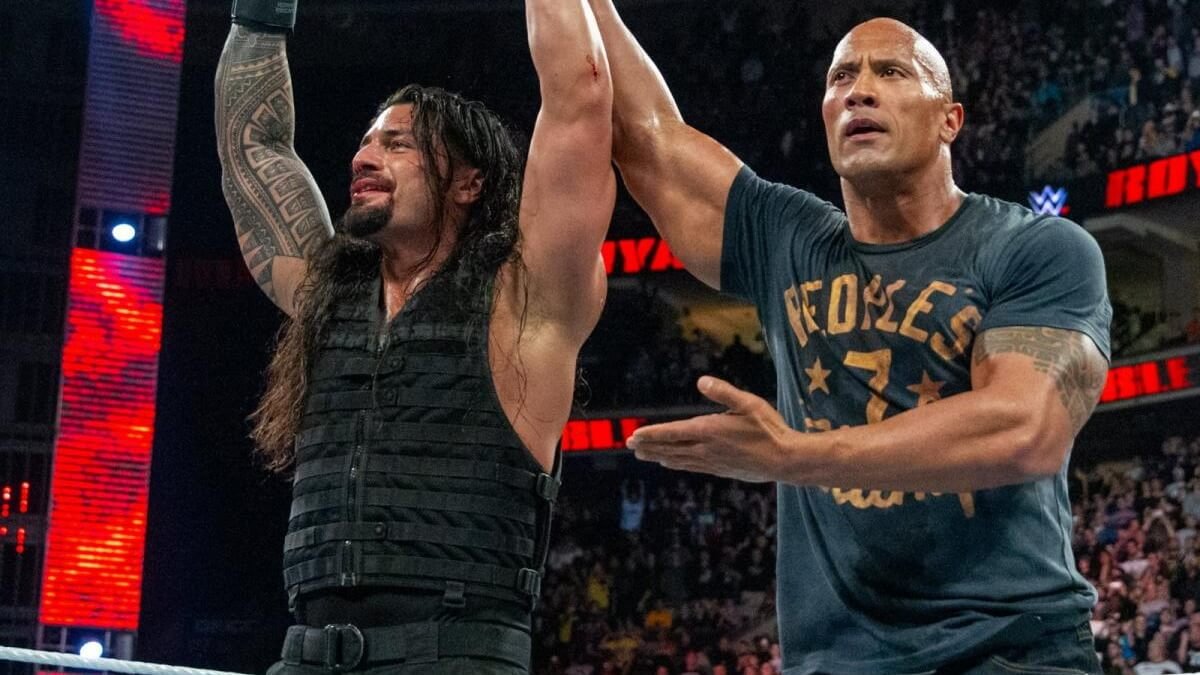 Relation to Roman Reigns – None

Relation to Jimmy Uso – None

Relation to Jey Uso – None

Relation to Solo Sikoa – None

Relation to Sami Zayn – None

But if you count Peter Maivia and Amituana’i Anoaʻi as brothers following their blood oath:

So basically, The Rock and Sami Zayn are both honorary uces.

Shocking Update On Miro Being Absent From AEW TV

Solo Sikoa Reveals What Paul Heyman Has Taught Him