5 months ago by Andy Datson

WWE really does love banning words from being uttered on its TV shows, and while some of them are understandable, a number of them make you sound very strange when you try and speak English.

The latest example of this is WWE’s insistence on never saying “non-title”, because as Dave Meltzer confirmed on the latest Wrestling Observer Radio, “non-title” is on the WWE banned list of words and phrases.

Here’s a conversation between Meltzer and Bryan Alvarez from the latest Wrestling Observer Radio:

Alvarez: “And he says, ‘Tonight, Ali is gonna be in a non-title championship contenders match…’” 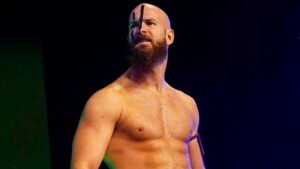 Instead, we get to hear things like “championship contenders match”, which definitely doesn’t sound worse.

While this isn’t an exhaustive list of banned words and phrases, here are just some things that WWE stars and commentators are not allowed to say. This list also comes from Dave Meltzer.

And you better make sure you don’t sneeze around Vince McMahon either, or he’ll send you to a local medical facility.

52 mins ago by Liam Winnard