DJ Whoo Kid has reflected on his experience at AEW Dynamite Grand Slam.

All Elite Wrestling announced this week that hip hop legend DJ Whoo Kid would be a special guest at their Grand Slam event from Arthur Ashe Stadium in Queens, New York on September 21.

The Brooklyn native made his appearance by accompanying The Acclaimed and Billy Gunn to the ring ahead of Max Caster and Anthony Bowens defeating Swerve In Our Glory to win the AEW World Tag Team Championships.

After witnessing the insane reaction for The Acclaimed at the show, DJ Whoo Kid took to social media to share his thoughts on the experience at AEW. 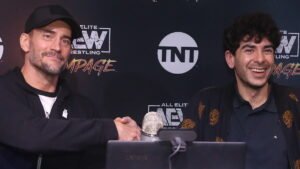 “I’m feeling the energy. I felt like I was one with 20,000 people I’ve never — I mean, I’ve toured with Eminem, 50 Cent, [in front of 100,000 people]. But those guys were the stars. This is the first time I absorbed the energy with these guys. The Acclaimed. I was scissoring like crazy. I scissored 18,000 fans at the same time. I didn’t know that was legal. You can scissor people like that? I don’t know, but it was amazing.”

Keith Lee and Swerve Strickland were accompanied to the ring by a hip hop legend of their own in Fabolous ahead of their showdown with The Acclaimed at AEW Dynamite Grand Slam.

The AEW World Tag Team Championships joined the ROH World Title as the other title to change hands on the show after Chris Jericho defeated Claudio Castagnoli to win his eighth world championship.

Stay up to date with The Acclaimed’s win-loss record in 2022 (for televised matches) at this link.