Paige Bids Farewell To WWE With An Emotional Open Letter

Paige has bid farewell to WWE with an emotional open letter.

In her open letter, posted to the Player’s Tribune, Paige noted that the world can now call her Saraya, her real name.

She expressed gratitude for a number of stars she has shared the ring with, including AJ Lee (April Mendez) and the Bella Twins:

I’ve known this moment would be coming for a while, but it almost didn’t seem real. Now that it is real, though, I’m just overwhelmed with gratitude.

Gratitude to people like A.J. — what an absolute badass she is. But she’s also so sweet and so thoughtful. I remember the first time we went on the road back to England, she got me this pair of Doc Martens with a Union Jack on the toe. Those little things that make someone feel cared about … that’s A.J. for you. I used to call her ‘my fairy godmother.’

Gratitude to people like the Bellas, who took me under their wing when they definitely didn’t have to. This business hasn’t always been the most encouraging place for strong women, and I admire how Nikki and Brie just came in and said, ‘You know what? F**k that.’ The Bellas empowered me, and then they taught me how to empower myself.

Also, seriously: the gratitude I feel toward each of the AMAZING women I shared a ring with!! While there are a million pieces to being a WWE Superstar, in the end for me it all comes back to wrestling. And that’s where a lot of my best memories are. Whether it’s my matches with Nattie (my favourite opponent), or with Emma (forever proud of the work we did in NXT), or countless others.

“When I first got to WWE, we weren’t very far removed from the time of bra-and-panties matches. A lot of people still considered the women’s match on every show to be the ‘pee break.’ And I’ll always feel such a kinship with the women of my era, because we worked so damn hard to prove ourselves. To prove that we couldn’t just wrestle — we could wrestle our asses off.

The star noted that she had went through highs and lows while with WWE, recalling a number of moments that have stuck with her, both good and bad. 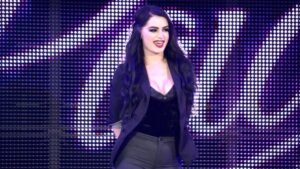 She expressed gratitude to WWE for always having faith in her, reflecting on her 2018 retirement announcement:

They even gave me a full segment on Raw to announce my in-ring retirement. I’ll cherish that for the rest of my life. Not just getting to make the announcement like I did, but also the respect it showed on WWE’s part, that they viewed me as worthy of that kind of treatment — the kind normally reserved for an Edge, or a Daniel Bryan, or an HBK, or a Hunter.

That they viewed me as someone who’d built a legacy of her own.

Before signing off, Saraya thanked everyone for allowing her to live out her dreams.

You can read the full letter right here.

We wish Saraya all the best for the future.

That’s a wrap @WWE see ya again some time! Thanks everyone for the support before, during and now after! Let’s see what the future holds! And thanks @PlayersTribune for this awesome goodbye letter – https://t.co/eR80o6uAy3