The handling of Gunther on the WWE main roster since his arrival on the SmackDown show after WrestleMania 38 has been highly praised, with Gunther’s presentation being very similar to what it was in NXT.

The change from his NXT presentation came in the form of Ludwig Kaiser, who came up to SmackDown with Gunther while their other Imperium stablemate Giovanni Vinci was left in NXT, being repackaged as a singles star.

Following Vince McMahon’s retirement from the company, reports emerged that McMahon had soured on the pair following a segment with Gunther on the July 4 episode of Raw, where he went face to face with R-Truth, who was dressed as Uncle Sam. 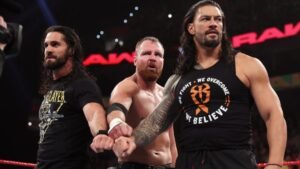 Ludwig recently spoke with WAZ in Germany, where he was asked about the rumours of McMahon losing interest in the group.

“I don’t know anything about the rumors. It is also usually the case that we don’t let it get to us like that. From our side, we have been at Smackdown, totally satisfied. We were well received there, the feedback was consistently positive from the beginning. We can’t complain about our TV time either. If you look at what we have achieved in the few months, including Gunther’s Intercontinental Championship title, that speaks for itself. Of course, there are always rumors here and there, but many things are not true.”

Ludwig then spoke about his reaction to Vince’s retirement from WWE, calling it ‘unimaginable’.

“His resignation was unimaginable. They hadn’t rumored about it before. A blatant thing, he is an absolute revolutionary and a visionary. Especially when it comes to streaming things like the WWE Network, for example. Great for us that we still had the chance to work with him, there has also been close, good cooperation in recent weeks.”

Vinci would eventually be called up at WWE Clash at the Castle, reuniting Imperium with Gunther and Kaiser ahead of Gunther’s classic with Sheamus. The trio are set to face Sheamus, Butch and Ridge Holland at the WWE Extreme Rules event next weekend.