This matchup will mark Riho’s in-ring return from a collarbone injury that has kept her sidelined from AEW since the January 8 Battle of the Belts. 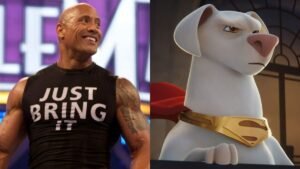 Watch: The Rock Shares Trailer For His Animated Movie 'DC League Of Super-Pets'

As previously mentioned, the former AEW Women’s World Champion revealed that her return was coming soon on her subscribers-only blog.

Riho’s opponent Yuka Sakazaki last wrestled on the July 28, 2021 AEW Dark: Elevation taping. She revealed her return, which you can read here.

This Owen Hart Foundation Women’s Tournament Qualifier Match will be the second women’s contest on Rampage with Dr. Britt Baker D.M.D. and Jamie Hayter vs. Toni Storm and Ruby Soho already set for the show.

The show will have a special start time of 5:30PM ET due to the NBA Playoffs coverage on TNT.

As previously noted, this is the second Owen Hart Cup Qualifier announced today for this week with the other set for Wednesday’s Dynamite.

41 mins ago by Ryan Coogan

60 mins ago by Ryan Coogan