When SmackDown Live went off-air, the ropes changed color, the LED boards switched logos, and, much to Big Cass’s dismay, the competition got quite a bit smaller. Indeed, the athletes of 205 Live became the center of attention after the main show went dark. But what happened on the show? Read on to find out.

Before the show got underway, Drake Maverick announced that Hideo Itami was banned from the arena following his actions last week. He then announced what would take place tonight, proving why he’s the best GM in WWE.

After weeks upon weeks of Gulak feuding with LHP, he finally teamed with his like-minded competitors to take them on in a six-man tag. The story here was simple and effective: technical prowess vs. aerial assaults. Gulak & Co. worked over the babyfaces with a series of rest-holds and a few solid submission maneuvers. However, in typical tag team match fashion, their advantage did not last long, and the babyfaces soon found themselves on top.

Following a submission break-up, the three luchadors unloaded a barrage of impressive moves on their opponents, leading to a great spot in which Kalisto and Gran Metalik hit stereo suicide dives to take out Gulak and Gallagher. Back inside, Kendrick locked in the Captain’s Hook, but Lince Dorado rolled through for a sneaky pin & win.

The best part of this match was the finish, as it played on an earlier spot. Gulak had the faces reeling, but was caught hooking the tights, and the ref stopped the count. When Dorado pinned Kendrick, he did the same thing, but was not seen and therefore scored the victory. This was a good first proper match for this six-man rivalry with several weeks build as a solid foundation for further installments. 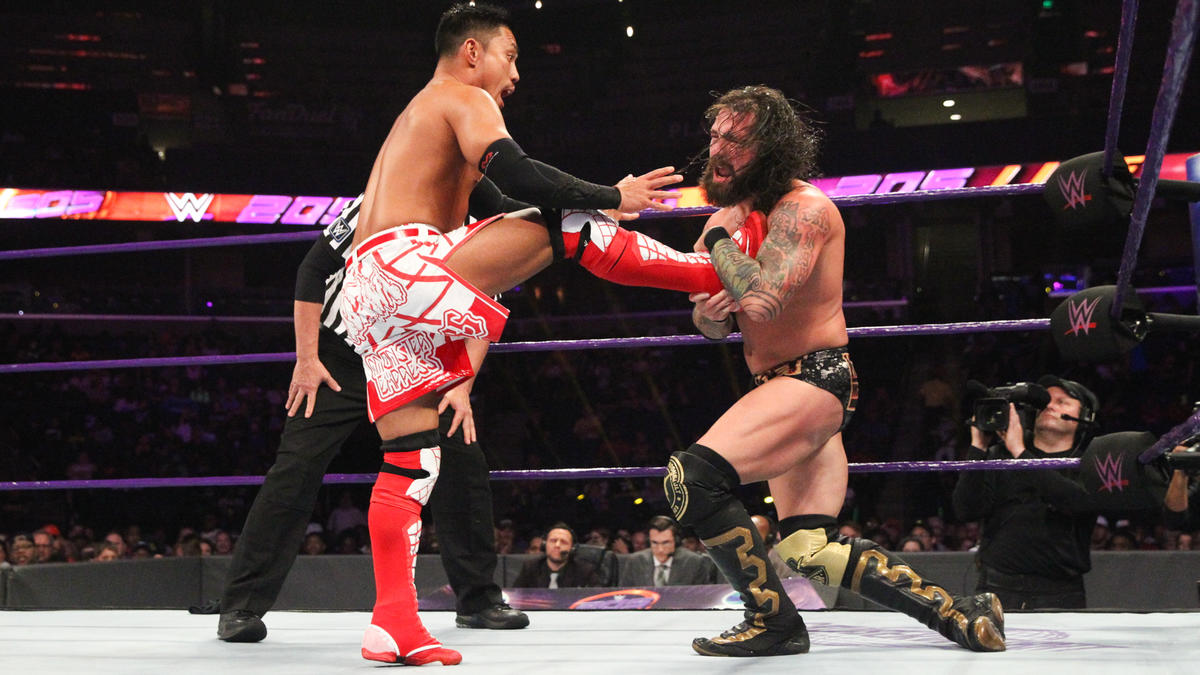 I’m not entirely sure how many weeks this is in a row (minus the week with the title match) that there has been a squash, but I’m tired of seeing it. Especially this one, as it did nothing to help the man it tried to get over. Akira Tozawa took on a jobber but was on the backfoot for most of the match. His opponent got in far too much offense, completely undermining the goal of the match. The best part of this bout was the Lio Rush vignette that aired after.

On to better things now, as ‘Tony Abs’ squared off against the ‘Heart of 205 Live.’ Nese was accompanied by Buddy Murphy, and the two men stared Ali down before the bell. However, Mustafa was not alone, as Cruiserweight Champion Cedric Alexander came out to even the odds. With the Heart & Soul united, the fight was able to begin.

Nese got the advantage early, grounding the Chicago-based superstar. The ‘Premier Athlete’ sent his opponent to the floor, and Buddy Murphy attempted to give his training partner the upper hand. This angered Alexander, who brawled with his former challenger, chasing him to the back. From there, Ali mounted a comeback, complete with an 054 for the win.

After the match, he asked Drake Maverick to book a triple threat match between himself, Murphy, and Itami.

This was never going to live up to the string of impressive main events we’ve been gifted in recent weeks. However, this was a serviceable main event that did its job to define the roles of all involved, as well as further the story surrounding the show’s top title. They may be pulling the trigger on the triple threat match a bit too soon, but if it leads to the quality of match that we expect, given the names involved, who cares? Add in a potential number one contender’s stipulation and next week’s show will be one worth watching.

What did you think of this week’s 205 Live? Let us know in the comments below or on Twitter Here! You can also join us on Discord to chat with Oli, Luke, the magazine team, the website writers and each other here!