At NJPW Best of the Super Juniors 29 Finals, Ace Austin became the newest member of the Bullet Club.

Austin became the latest IMPACT Wrestling star to join the acclaimed stable, along with Chris Bey who joined last year.

Speaking on Talk N Shop, Karl Anderson and Rocky Romero discussed the addition of Ace Austin to the faction. 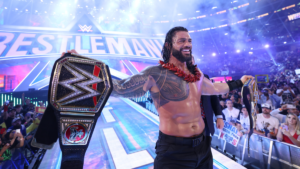 “It’s whatever booker wants to put the son (of a) bitch in. People will say, ‘Why did you let this guy in?’ Guys, listen, you have to understand. The person that makes the show gets to put the fucking person in the damn Club. Scott D’Amore wanted Ace Austin in there. That’s not saying I didn’t want him in there, it’s a great shot for him. You can hate on the Bullet Club all you want, of course, anything that is done successfully is going to get hated on. You can’t deny that it’s going to help your career.”

On the same show, Karl Anderson will challenge Tama Tonga for the NEVER Openweight Championship.

Fellow Bullet Club member Juice Robinson was scheduled to defend his IWGP United States Heavyweight Championship against SANADA and Will Ospreay in a three-way, but he has been pulled from the show.

7 days ago by Amanda Savage

43 mins ago by Amanda Savage