A new report has revealed a legit “heated exchange” between AEW President Tony Khan and one of the company’s top stars.

According to Fightful Select (subscription required), Tony Khan and MJF had a discussion over the weekend that was said to leave both men frustrated.

The exchange stemmed from MJF’s interview with Ariel Helwani, where the two spoke for over an hour about various topics.

The most notable part of the interview concerned MJF’s AEW contract status with his deal running until 2024. 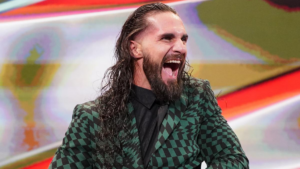 Seth Rollins Is Going To WrestleMania 38!

The report says that the contract status of MJF is what has left him frustrated as of late, but that Tony Khan took issue with the interview being set up without notifying AEW’s PR team.

There was no confirmation that there was an issue with the subject matter or the interview in general if that was the case.

Fightful reached out to both Tony Khan and MJF, but didn’t get a comment on the record.

We will have further updates on this story when they become available.

27 mins ago by Liam Winnard

Adding A New Member To Every Current AEW Faction

Wardlow Reveals ‘Original Plans’ For His Character In AEW

Thunder Rosa Segment Added To AEW Dynamite Before Double Or Nothing