A WWE announcer has responded to the commentary team changes within the company.

Ahead of the “season premieres” of both WWE Raw and SmackDown, the company announced several major changes to their commentary teams for each show.

As first reported by Variety, WWE announced that Michael Cole will now team with Wade Barrett behind the desk on Friday Night SmackDown.

This moves Barrett from NXT to SmackDown in place of Pat McAfee who is away from the promotion with an ESPN’s College GameDay gig. 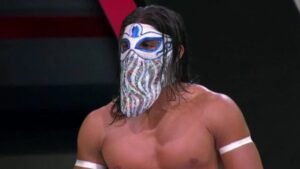 Wade Barrett took to Twitter to respond to the news, tweeting:

BOOM! Excited to bleed blue on #SmackDown alongside the GOAT @MichaelCole for a little while! What a crazy opportunity…

And THANK YOU #WWENXT.. I’ll be back!

Barrett worked on the NXT brand since August 2020 and recently signed a one-year deal with WWE to become a permanent member of their commentary team.

The “season premiere” of SmackDown will feature Gunther vs. Sheamus for the Intercontinental Championship and Undisputed WWE Universal Champion Roman Reigns going face-to-face with Logan Paul for the first time.