A WWE star has explained why being a superheroes fan helped to spark his interest in wrestling.

On the August 22 edition of Raw, Johnny Gargano made his return to WWE and kickstarted a feud against Mr. Money In The Bank Austin Theory.

Gargano is known as an avid fan of comic books and superheroes dating back to his childhood. This apparently helped to spark his interest in professional wrestling.

Speaking on El Brunch de WWE, Johnny Wrestling was asked where his love for wrestling came from.

“As we talked about already, I am a big nerd, and I love superheroes and larger-than-life characters. So when I was younger, I was a fan of the Power Rangers and the Teenage Mutant Ninja Turtles. One of my best friends at the time was a big wrestling fan, so he was watching this thing called professional wrestling, and he showed me it. I was like wow, this is kind of like superheroes and larger-than-life characters in the real world, like come to life. I think I realized at that point like I can’t be a Power Ranger, and I can’t be a Teenage Mutant Ninja Turtle in real life, as those aren’t real professions and real jobs that I could attain.” 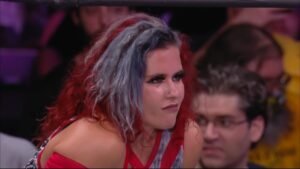 Gargano continued on to note that he realized that he could be a superhero in the business by wearing a colorful costume, doing athletic moves and entertaining people in the wrestling world.

“But I can be a professional wrestler, and I can do that in real life, and I can wear these crazy costumes and do this larger-then-life acrobatics and have this crazy entertainment value. So I think those kind of things kind of go hand in hand. I kind of always think wrestling is like a comic book come to life. So the fact that I’m able to be a kind of real-life kind of quasi comic book character/superhero guy, I think it kind of goes hand in hand there. So I think that’s why it really appealed to me when I was younger. Like I can’t be Batman, but I can be Johnny Gargano I guess.”

Stay up to date with Johnny Gargano’s win-loss record (for televised matches) at this link.