AEW star Brian Cage made his return at the ROH Supercard of Honor show over WrestleMania 38 weekend, aligning with Tully Blanchard as part of his new group.

Cage had previously been absent from AEW television since he lost the FTW Championship to Ricky Starks back in October 2021, with many being surprised when AEW opted to extend his contract earlier this year. 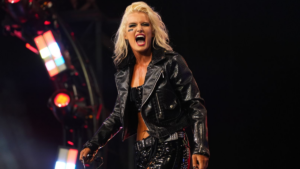 Many had assumed that WWE would show interest in Cage, given his appearance and WWE’s recent policy of signing larger stars.

Cage recently spoke to Chris Van Vliet about his initial WWE release back in 2009, and what the reason was.

“Well, I was waiting on a raise. I was due for one. I was told I would be getting a call and going on the road. I missed the call from the office, but I am stoked and I call them back. They say, ‘Hey Brian. How are things going?’ I said, ‘Things are good’, and I’m trying to play it cool. They then say that they are coming to terms with my release,

“I’m not trying to get smarta*s here, but I legitimately asked if they had the right number. It didn’t even cross my mind. They gave me the reason that I’m a little too indie and I need to get some more experience. So I have to go to the indies to get more experience and not be so indie? Hmm, ok, that makes sense.”

Cage continued on, revealing that WWE did eventually get back in contact with him for NXT, before telling him that he was ‘average at best’ and rescinded their offer.

“They did call to say that they were going to do Tough Enough and bring me back for it, but then they took me off the list. They invited me down and wanted me on NXT, but then they changed their minds again. I asked what happened and they said, ‘You are average at best and we are no longer interested.’ They sent that in a text and I was so heated.

“I kept it as professional as I could. There was a lot I wanted to say. I got back to them saying we might work together again in the future, but actually, that was when my desire to go back to them went away. My life professionally and personally excelled when I let go of that. They reached out to me several times and people would reach out to them about me. They talked to me a lot of times about tryouts and it never happened.

“When it finally happened, I turned them down because I had just signed with AAA and Lucha Underground. They were shocked that I didn’t want it, and that felt kind of good. There was some small talk, but it never really went anywhere. I ultimately wanted to go to AEW because there were so many people I wanted to work with there. If I stayed at Impact, I feel like my ceiling would have been capped.”

6 mins ago by Amanda Savage