IMPACT Wrestling star Mike Bennett wants he and Matt Taven to remind everyone who they are at Bound For Glory.

On the September 1 edition of IMPACT on AXS TV, Mike Bennett and Matt Taven of The Kingdom defeated The Good Brothers to win the IMPACT World Tag Team Championships.

The Kingdom will now defend the titles against The Motor City Machine Guns (Chris Sabin & Alex Shelley) at IMPACT Bound For Glory on Friday, October 7.

Speaking with Kevin Kellam of Sportskeeda, Bennett detailed his mindset heading into Bound For Glory and The Kingdom wanting to prove themselves at the event. 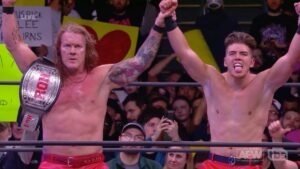 “We left the tapings this past weekend, and I think one of the last things I said to Taven right before we left is I said, ‘Bound For Glory is gonna be a lot of fun. We’ve never wrestled the Motor City Machine Guns, and I said, ‘Let’s remind everyone who the f—- we really are.’ That was my mindset. We’ve done a lot in this industry, we’ve gone to Japan, we’ve wrestled the Bullet Club, we’ve wrestled the Young Bucks. We’ve won gold everywhere we’ve gone, and sometimes I feel like we oftentimes get left out of the conversation of really, really good tag teams that are still around, have done a lot of good things. So I said to him, I was like, ‘Let’s use that to our advantage.’ We’ve got a f— chip on our shoulder. Let’s remind everyone who the f— we are, and I have a feeling like the Motor City Machine Guns are going in there too thinking that way. They’ve been having some killer matches the last year or so, and I feel like they’re another team that doesn’t get talked about. When you look at the top tag teams, you always hear FTR, you always hear the Young Bucks, you always hear The Usos, and here’s Motor City Machine Guns, here’s The OGK. We’re like wait a minute, we’re doing just as well, we’re killing it just as well. So let’s remind everyone who the f— we are. That’s our mindset going in.”

The Kingdom arrived in IMPACT Wrestling in January as part of the Honor No More stable with Eddie Edwards, Maria Kanellis, PCO, Kenny King and Vincent.

As previously noted, several IMPACT stars including Maria Kanellis and The Kingdom have deals that are set to expire soon.

16 mins ago by Sanchez Taylor

26 mins ago by Dave Adamson

57 mins ago by Sanchez Taylor