Imperium Addresses Their Time In NXT And The Transition To NXT 2.0

Imperium may not be together anymore, but they were able to discuss the transition to the NXT 2.0 rebrand while remaining a group.

Speaking with Fightful’s Sean Ross Sapp, the trio of Gunther, Fabian Aichner and Marcel Barthel explained how they have remained authentic to themselves throughout the changes to the brand. 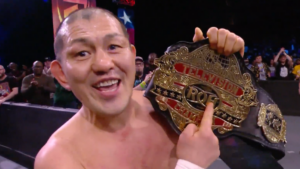 When asked about the NXT 2.0 rebrand, Aichner answered:

“It’s been a crazy journey, obviously. Things have changed a lot in the last five years. What speaks for us is that we’re authentic and that’s why it still works nowadays. It doesn’t matter if it’s NXT, NXT 2.0, RAW, SmackDown. It doesn’t matter where we go, I think we stay true to ourselves and we’re gonna keep doing that in the future. I’m looking forward to it.”

Barthel added that he feels Imperium has been one of the winners of the transition, saying:

“Absolutely. You hit the nail on the head. I can just say that. It’s been a crazy transition for all of us because when we first started is very different to now. I’m not even rating that, better or worse, but I just said before, Fabian and I have been here for three / four years before the 2.0 transition. I think we were one of the few winners of that transition. Because it actually showed how much work we put in. So many other guys coming in all of a sudden, the difference between them and us is very clear. I think we’re absolute winners of that transition. Keep going,”

The leader of the stable, Gunther, added that Imperium will continue to represent what they stand for on the biggest stage possible.

“I think the goal for us is to represent what we stand for whenever we can on the biggest platform possible. I think that has always driven us. That won’t change. I think ten years ago we had the same beliefs of what we want to be as wrestlers or what we want to represent in this sport. We just stuck with that and it’s not gonna change. It’s gonna take us to places, for sure.”

This interview was one of the final for the group together as Gunther and Marcel Barthel, now known as Ludwig Kaiser, have been called up to the SmackDown brand.

It remains to be seen what is next for Fabian Aichner on the NXT brand or a potential main roster call-up.

3 weeks ago by Andy Datson

Gunther Reveals Whether He Wants To Change Name Back To WALTER

Gunther Open To Being Involved With NXT Europe

38 mins ago by Amanda Savage