NJPW has announced the full line-up for the upcoming Dominion special, which will air on June 12.

It had previously been confirmed that Kazuchika Okada will defend his IWGP World Heavyweight Championship against Jay White during the major event.

Several notable matches have been added to the card, including an IWGP US Championship bout. Juice Robinson missed Friday’s (June 3) Best of the Super Juniors final event after being rushed to hospital to treat his appendicitis, and has since been stripped of the IWGP US Title. Will Ospreay and SANADA will face off for the vacant gold. 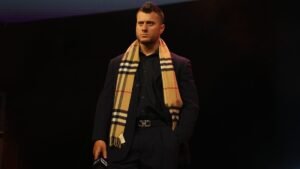 Which AEW Star Surpassed MJF In Google Searches On Day Of Double Or Nothing?

You can view the announced card below:

This event will take place ahead of AEW x NJPW Forbidden Door on June 26. An interim AEW World Champion will be crowned during the crossover show, with the winner of Hiroshi Tanahashi vs Hirooki Goto set to face an AEW star for the gold at the event.

Roman Reigns Names Opponent He Was Most Nervous To Face

31 mins ago by Ryan Coogan

42 mins ago by Ryan Coogan