Owens and Scherr crossed paths numerous times while both were with WWE, notably feuding over the Money in the Bank briefcase in summer 2018.

While Owens is still with WWE, Scherr was released from his contract with the company in June 2021.

The two stars were reunited during the MegaCon event, with Reddit user u/CenturionElite sharing a photo of Owens and Scherr embracing, with Owens literally swept off his feet. 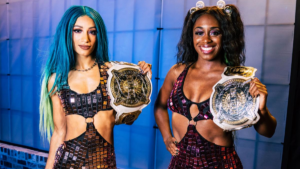 You can view the photo below:

Owens is currently in a ‘feud’ with Ezekiel, trying to prove that the new face is actually WWE star Elias. He last wrestled on TV on the May 2 edition of Raw, teaming with Alpha Academy to face off against Ezekiel & the Street Profits.

Scherr has returned to the ring following his WWE departure, helping to launch the Control Your Narrative promotion. He is slated to headline the inaugural show for Wrestling Entertainment Series, the promotion created by the former Authors of Pain.

4 weeks ago by Liam Winnard

Sami Zayn Qualifies For Money In The Bank Ladder Match

2 hours ago by Wrestle Talk