Cody Rhodes made his WWE return back at WrestleMania 38, defeating Seth Rollins in his return match following his AEW departure back in January.

During Cody’s time in AEW, and still to this day, QT Marshall served as the head trainer of Rhodes’ ‘Nightmare Factory’, with the two having a, rather long, feud on AEW Dynamite last year.

QT Marshall recently appeared on Cultaholic’s Desert Island Graps, where he discussed his current relationship with Rhodes now the two are in different promotions. 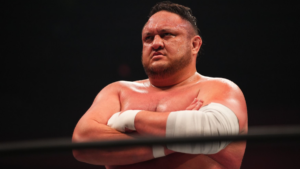 “We talk every day. Every day. I know what’s – he doesn’t go into full detail of what’s going to happen when he’s about to go out there, but obviously, we still communicate. He’s the closest thing I have to a best friend, I guess. He’s somebody that really went above and beyond to open a door for me, and he’ll be the first to tell you, he opened the door.

“I did all the work. You do need it sometimes, you do need someone to open that door for you, and he was willing to do it. At the same time, I was going to work really hard also knowing that his name and reputation was kind of stamped onto my back. It made me work even harder, because at the end of the day, and I say this all the time, I thought he would go back to WWE before AEW had become a thing.

“I was like, I was going to train Brandi, I’ll work out with Cody for All In, all this stuff, but eventually he’s eventually going to go back to WWE because there was no AEW. So, you know, I was OK with that, I’m not gonna go to WWE. They’ve already told me no. So, I’ll just be his friend, and that’s it. We’ll hang out. We only live thirty minutes from each other, and I was super excited, just to have a peer in the wrestling industry that kind of looked at me as a peer.”

Marshall continued on, expressing his delight that Cody is doing well for himself in WWE, and being where he wants to be.

“You know, when AEW started, I remember he asked me, ‘hey, do you wanna be my assistant?’ And I was like, ‘no. I wanna wrestle, but sure!’ Of course, I’ll do whatever you ask me to do. So yeah, we still speak all the time. I’m super happy for him. I think this is something he really needed to do for himself personally. And honestly, like, we’ve all been there.

“We’ve all had those, no pun intended, crossroads in our careers where we have to decide what’s better for us personally. And that sounds selfish, but at the end of the day, you can only make other people if you’re happy. If you’re not happy, you’ll never be able to make anyone else happy because you’re still always striving for that happiness, and there’s not enough of it to go around if you’re not happy.

“So, I do – it sucks going to work every week without him there, like, that is the bad part. But, the good is, watching RAW last night. I DVR’d it and flipped it on, and I got to see his segments. I think this is exactly what he probably wanted. This is why he left in the first place, he wanted to come back and be treated like this.

“And they did, and they’ve given I’m sure everything he’s wanted, or else I can’t have seen him leaving. But at the same time, like I said, he had to do what he had to do, and I hope the best for him. I hope he wins the World Title.”

20 hours ago by Connel Rumsey