In an epic promo on tonight’s AEW Dynamite, MJF left no stone unturned as he continued to blur the lines between work and shoot.

You can get caught up with all of the news behind the scenes of the drama at this link.

If you missed Dynamite live, we’ve also got you covered with this full transcript of the wild promo –

“I am in a lot of pain right now after what happened on Sunday. But all you people want to do is hear me talk, right? That’s what you want, right? You want to hear me talk? I’ll talk [throws off Burberry scarf] but this is Max Friedman talking.

Big merger boss, lot of important executives here tonight to watch your product. Would be a real shame if something bad happened.

I wouldn’t want to embarrass you, man. Speaking of embarrassing, you’ve been trying to sit down with me to hash things out for quite some time haven’t you? Well guess what? Too little, too late.

Nobody is on my level. No one. Everything I touch, turns to gold. There is nothing I can’t do.

Every time I come out here, I am not expected to hit home runs, I’m expected to grand slams, and I do that sh*t on a weekly basis!

See all the other boys have to settle for being great, I have to be perfect because I’m the twenty-six year old who is constantly held under a microscope, because I’m the only guy who is capable of carrying this company on my back, as I have, for months!

Now let’s talk about you fans huh? You people call yours fans? You’re not fans, you’re uneducated marks. You sit there on your phones, tweeting out your opinions like they’re worth a damn, let me explain something to you people: you don’t know shit.

How could I possibly be the best? Well news flash – I am the best! I’m the best in the world! Because I’m the only guy who makes you feel and unlike all those other boys, I don’t have to do a bunch of bullshit to get you there.

I am a geerational talent and you people consistently take me for granted but it’s not just you. It’s the big man in the back too.

Here’s something you guys can’t take for granted, here’s something he doesn’t want you to know. Do you guys know who the second biggest minute for minute draw is in this entire company? Nope, you wish. It’s me. It’s me. And if you don’t believe me, ask stat boy Tony in the back and see what he’s got to say but whatever you do don’t ask him to reach into his pockets and pay the man who has been busting his ass for him since day one! No, no, no, no, make sure he hoards all that money. Make sure he hoards all that money so he can make sure and give it to all the new ex-WWE guys he keeps bringing in that can’t lace my goddamn boots!

Hey boss, would you treat me better if I were an ex-WWE guy? See maybe you don’t get it man, here’s the problem with you boss: you got a position of power in a wrestling company, when the only position that you should be assuming is behind the guardrail with all of them!

I don’t want to wait until 2024, but you won’t listen to me so allow me to make it a little easier for you: Tony, I want you to fire me. Don’t count me down! You piece of shit! You shut your mouth! 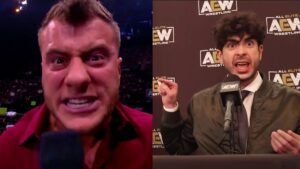 Did we just witness an event that will change professional wrestling history by creating a full on-screen character out of AEW President, Tony Khan? It doesn’t feel like an exaggeration to say this may be the promo of a generation but only time will tell.

2 hours ago by Petr Paboucek