WWE SVP of Talent Operations and Strategy James Kimball has revealed an interesting rule that WWE has in place regarding NXT call-ups.

Earlier this year, several notable NXT names were let go by the company for not progressing as the company hoped they would, including Parker Boudreaux (fka Harland).

It had been reported that WWE will evaluate progress of Performance Center talent every six months.

Speaking with Bleacher Report, James Kimball confirmed this, noting that every talent that passes through NXT will either be called up or fired within two years of their debut. 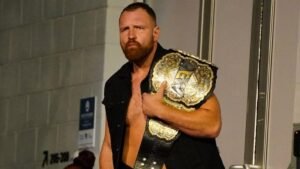 Commenting on the systems currently in place at the Performance Center, Kimball said:

“Literally, six-month intervals. Two-year mark, you’re up or out. Obviously, there is a constant evaluation at the Performance Center. Coaching staff, our staff, on-site, all the time, constantly evaluating, but formal, deliberate evaluations occur in six-month periods.

“At that time…these all kind of flow around the same entry points. We’ll do a tryout and then a set of releases and churn out. Right now, our goal is to add volume, quality, and depth to developmental. Coming into this week, we have 110 talents in developmental.

“Our goal by the end of the year is 130. Sweet spot for us, long-term, is about 150. During COVID that number got below 100. We’re replenishing it, but we’re replenishing it with what we believe to be real premium, quality talent.

“To do that and to do it consistently, you have to make sure there are no bottlenecks. That boils down to archetypes too. Right now, in this tryout, there are 3 to 4 females who are 5’3” to 5’5”, 130 to 140 pounds, generally the same type of look.

“Eventually, it’s the same type of character. We have a few of those same archetypes and frames in developmental. We need to now be discipline. You have so many slots for this profile and that make-up. We come into the week thinking, while there may be some gaps, we need height on the female side.

“Here is a full system in place from a churn and a schedule against where evaluations take place and at that two-year mark, if you’ve not made it on NXT TV on a regular basis, this is not for you and it’s not for us,” he said.

Triple H has shaken up the main roster with a number of additions since taking over WWE creative in late July, with the likes of Braun Strowman, Johnny Gargano and Dakota Kai rehired.