Andrade El Idolo has addressed the possibility of a WWE return following recent speculation about his future.

On Friday’s (October 7) edition of Rampage, Andrade will face off against the Dark Order’s 10 in a match with big implications. If Andrade wins, 10 removes his mask, however if 10 wins, Andrade leaves AEW.

Ahead of the bout, Andrade has fuelled speculation regarding an AEW departure with his recent social media activity.

Following Andrade appearing to express frustration with his position in AEW, some have theorised that the former NXT Champion wants to return to WWE>

Speaking with Mas Lucha, Andrade compared his WWE run to his stint with AEW, noting:

“It’s difficult. I was in WWE and I had a big contract and they offered me an even better contract but I rejected it because I wanted to continue growing, you know? That’s why I chose to go to AEW, but right now I feel a little stagnant and I want more.

“I feel like I am going through what I was going through in WWE right now. Although I have a great contract and the schedule is good too because the WWE schedule is unimaginable. People believe that you only wrestle once a week, but you wrestle non-televised matches in other cities and countries.

“Right now, it’s difficult because I want more in AEW, especially now that RUSH came in. Since he joined, I was like I want more. There is lots of stuff happening, including people saying I want to go back to Triple H, but I don’t want to speak too much about that.” 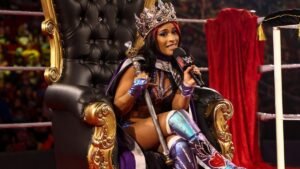 Andrade was let go by WWE in March 2021 after requesting his release. He made his AEW debut on the June 4, 2021 edition of Dynamite.

WWE has underwent a major management change since then, with Triple H now running WWE creative as the company’s Chief Content Officer.

“He gave me an opportunity and helped me a lot in NXT and I spoke to him when I requested my release. We are on good terms and he always mentioned that I can keep in contact with him. I cannot say that I have contacted him recently, but it is difficult due to legalities.

“If he wanted to speak to me, my wife works there, so he can always reach out to me from there too. It is difficult at the same time because Ashley (Charlotte Flair) has time off due to personal reasons and she will specify them in future interviews.

“It was very heavy because she worked on Thursdays to work on weekends while I traveled on Tuesdays and returned on Thursdays as soon as she was scheduled to leave. Right now we are good because I get to see her more, I hope she comes back soon. With AEW, I don’t know what will happen on Friday.”

Charlotte Flair hasn’t wrestled since losing the SmackDown Women’s Championship to Ronda Rousey at WrestleMania Backlash in May. Andrade and Flair got married later that month.