Dax Harwood of FTR called out Tony Khan during his appearance at NJPW Royal Quest night one.

During the October 1 show, Harwood and Cash Wheeler defended their IWGP Heavyweight Championship against Aussie Open.

Following the bout, Harwood issued a message for the AEW President before praising Aussie Open, noting:

“This is the first time we have been overseas since 2019, and we thank you. Two things. First thing’s first: Tony Khan, we will work for you. Book us, brother.

“Second thing and most importantly, these guys (Aussie Open) are the future of tag team wrestling. All self preservation to the side, they may be the best tag team today.” 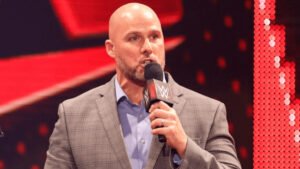 FTR currently hold tag-team titles for AAA, ROH and NJPW. The duo last teamed in AEW at All Out, competing in six-man tag team action with Wardlow against Jay Lethal and the Motor City Machine Guns.

Harwood recently indicated that FTR once again look to challenge for the AEW Tag Team Championship, which is currently held by The Acclaimed.

Results from NJPW Royal Quest II night one can be found at this link.

55 mins ago by Ryan Coogan