Ezekiel has now shared a photo of himself posing with Elias, concrete proof that he and the former 24/7 Champion are completely different people.

Ezekiel made his WWE debut on the April 4 episode of WWE Raw, seemingly fast-tracked to the main roster. Kevin Owens claimed that Ezekiel was just a clean-shaven Elias, but Ezekiel cleared things up, noting that he’s Elias’ brother.

On this week’s episode, Owens once again brought up his conspiracy that the two brothers are the same person, but Tommaso Ciampa, known for his sanity, clarified that it was indeed Ezekiel, who passed by.

Ezekiel has now shared an image of him and his brother, with their arms around each-other. Aware of the conspiracy, the caption on the photo reads:

“Haters will say it’s photoshop, but we know the truth.” 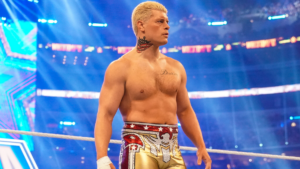 Elias last wrestled on WWE TV in July 2021, losing to the now-released Jaxson Ryker in a Symphony of Destruction match.

In completely unrelated news, several stars have returned to, or debuted on the WWE main roster with new names, including Lugwig Kaiser (fka Marcel Barthel) and Raquel Rodriguez (Raquel Gonzalez) who joined the SmackDown roster on Friday.

Stay up to date with every WWE name change of 2022 using our tracker at this link.

37 mins ago by Amanda Savage

5 mins ago by Liam Winnard