When the match got started, Julia Hart sent her Varsity Blonds stablemates away from ringside and employed a more aggressive and dastardly offense than usual throughout the match, using Shida’s jacket as a weapon against her and gouging at her eyes. 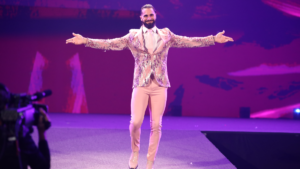 While Shida was celebrating, Serena Deeb’s music hit and she appeared in the ring with a steel chair while Shida had a kendo stick and there was an epic staredown before Deeb retreated.

Shida joins Toni Storm and Jamie Hayter who have already also qualified to enter the tournament.