Logan Paul believes himself a natural in the wrestling ring, so much so the way he describes his preparation is downright frightening, never having practiced the moves in an actual ring.

Logan had several WWE guests on his podcast today, Impaulsive including Sasha Banks and Becky Lynch, and described his experience at WrestleMania including his soreness, saying:

“It is electric, when there is someone you love in that ring and doing those moves….by the way, I didn’t practice any of those moves. That surface is hard, it is not bouncy, it is not a trampoline, there is no give. It is plywood, it’s wood. ‘Wrestling is fake.’ Shut the f**k up, I am sore. The left side of my body kills me right now. Those are real slams, they hurt. In practice even, doing those moves, you’re going to compromise your body ahead of the match. So you can do it on the crashpad as much as you want, but when I hit the three amigos — Rey had done it earlier in the match, it was a callback to Eddie Guerrero and his whole shimmy, it was a little disrespectful that I did the move he just did. I had never practiced a suplex like that. I threw my legs up, I’m airborne, on the second one, my head snapped back and I thought for sure, ‘I just got a concussion.’ I’m looking up at the lights, ‘whatever, it’s WrestleMania.’ The adrenaline is crazy, the crowd is going nuts.” 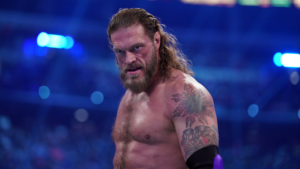 Edge Reveals How Much Longer He Plans To Wrestle

Wild to think that throughout practice, Paul was taking bumps on a crash pad and discovered the vast difference it had on his body midway through a match that saw him continue to shine throughout!

Logan Paul teamed with The Miz to take on Rey and Dominik Mysterio. While they won the match, afterward The Miz turned on Logan Paul by hitting him with his finisher, the Skull Crushing Finale.

look, i’ve not had good things to say about this man for his past antics, but he hasn’t done anything truly objectionable in recent memory (that i know of). I’m starting to have some grudging respect for him, if only because its insane how athletic and smart he is.

5 mins ago by Liam Winnard

35 mins ago by Andy Datson

22 mins ago by Andy Datson