Ricochet has commented on missing WrestleMania 38 despite being Intercontinental Champion, believing that the title cannot miss another Premium Live Event.

Following the announcement that Ricochet would instead be defending the gold on the SmackDown before WrestleMania, it was pointed out that the Intercontinental Championship has went a full calendar year without being defended on a WWE Premium Live Event.

The title’s last pay-per-view outing was when Apollo Crews defeated Big E for the gold in a Nigerian Drum match at WrestleMania 37.

Speaking on WWE The Bump,  Ricochet noted that he plans to defend the title at WrestleMania Backlash and Money in the Bank, saying:

“That’s my goal for next year, to make sure that (the Intercontinental Championship) and myself, collectively, together, make it to WrestleMania and make it on WrestleMania and that this title, I want to make it as famous as possible to where it can’t miss another one. 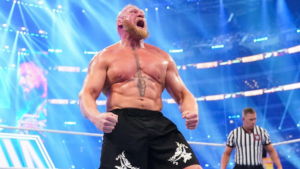 Ricochet is set to defend the gold against Jinder Mahal on Friday’s episode of SmackDown.

Stay up to date with every WWE title change of 2022 using our tracker right here.