Ahead of Saturday’s show, it had been announced that Arez and Chik Tormenta were set to defend their gold against Guevara & Conti, Octagon Jr & Sexy Star II, and Latigo & Maravilla.

Before the match began, Guevara, on crutches, stated that Parka Negra would be taking his place in the bout, as he was unable to compete.

In the closing moments of the match, Guevara entered the ring and attacked everyone with his crutch, before dismissing Parka Negra (indicating he had been paid off), and scoring a double-pin with Conti. 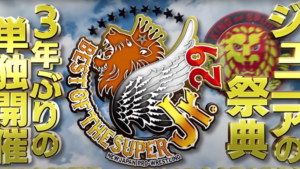 The crutch spot had played off speculation that Guevara was not medically cleared after a rough botch during his TNT Title ladder match against Scorpio Sky on AEW Dynamite, which you can read more about right here.

Here are the full results from the show (via Fightful):

31 seconds ago by Connel Rumsey

The Miz & Logan Paul To Team At SummerSlam