9 months ago by Connel Rumsey

One of NXT’s newest women’s stars made her debut on last night’s episode (April 29) of NXT Level Up, when Arianna Grace won her debut against Amari Miller.

Arianna, real name Bianca Carelli, is the daughter of former WWE Intercontinental Champion Santino Marella, who made sure not to miss his daughter’s first match. 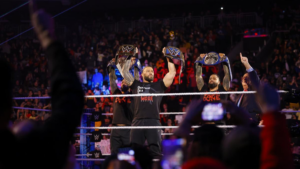 Taking to Twitter before the show, Santino posted a wholesome message, saying:

Tonight it comes full circle, my parents would record every episode of #Raw & #SmackDown when they knew I was going to be on. I just set the DVR to record my daughter’s debut on #NXTLevelUp #proud

Arianna, along with Sloane Jacobs and Kiana James, has been announced as one of the participants in the first ever NXT Women’s Breakout Tournament, starting in two weeks.

You can see the win/loss records for the NXT women’s division in 2022 at this link.

Spoiler On NXT Star Brought In For WWE Royal Rumble

6 days ago by Ryan Coogan

6 days ago by Liam Winnard

Huge Change Being Made To NXT Vengeance Day Championship Match

1 min ago by Dave Adamson

AEW Star Praises WWE Name Who Could Have Broken Under Pressure

14 mins ago by Dave Adamson

Top Name Addresses Criticism That He Was ‘Jobbed Out’ By GUNTHER

32 mins ago by Dave Adamson

50 mins ago by Dave Adamson