Triple H has commented on a part-time WWE star who he says is creating opportunities for everyone.

At WWE Crown Jewel, Logan Paul will challenge Roman Reigns for the Undisputed WWE Universal Championship in the main event.

This will mark Paul’s third WWE match and will easily be the biggest bout of his career.

Speaking with ESPN, Triple H discussed Logan Paul getting this huge opportunity so soon into his career in the company. 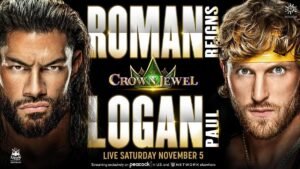 The WWE Head of Creative continued on to talk about Paul’s popularity and name value helping everyone long term after he goes away, stating:

“When Logan gets this opportunity, eventually he goes away or whatever. He is creating bigger opportunities for others.

#”It’s the bigger-picture thinking. I understand why people think that way ’cause your concern is your career. But the truth is in the overall picture, this is better for everybody.”

Logan Paul himself was also interviewed by ESPN and discussed the huge opportunity at WWE Crown Jewel so quickly into his career.

“If you’re just in and out like a lot of celebrities — they do it once and they get their recognition and then they’re done.

“But I wanna be more than that ’cause I think I can be, I know I can be.

“The only thing that’s preventing me from being potentially one of the greatest in this sport is the time and energy that I put into it, which is the one thing I’m good at.”

Paul continued on to state that if he can focus more time, the sky is the limit in WWE, saying:

“So if I do that, I don’t see why I can’t get there. There’s a lot of s*** I can do. But something about wrestling is so exciting, right? It’s entertaining.

“I get to be a showman. I get to be physical. I get to get highlight-reel clips on my social media. Pays well. WWE is very generous.”

Also, it was revealed at the press conference who will be in Paul’s corner to offset The Bloodline at Crown Jewel this Saturday.

For the full lineup for the event, click here.

2 mins ago by Dave Adamson

16 mins ago by Dave Adamson

46 mins ago by Dave Adamson