WWE Raw star Theory has been one of the brand’s breakout stars since his callup from NXT back in the 2021 WWE Draft.

Theory quickly aligned with Vince McMahon on WWE television, featuring in a high profile match with Pat McAfee at WrestleMania 38 before caturing the United States Championship.

The sky seems to be the limit for Theory, and he himself seems to realise that. Speaking with Ryan Satin on Out of Character, Theory was asked about whether he believes he could be the face of the company. 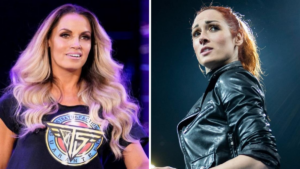 “I think so. I don’t know what that level is because I’m on my way up and slowly starting to see how different things are and is a lot of evolution for Theory as a character and me, in my life, being ready for that. The way things are going, I feel I’m at a steady pace, but at the same time, there are some things that happen that put you on a new level. Honestly, I try not to get in my head too much because, at the end of the day, these are big accomplishments and this is the WWE. This is what I dreamed of my whole life. At the end of the day, I know myself and I know my work ethic and I plan to only get better. I want to give this everything I’ve got and I don’t want to hold anything back. I also want to enjoy every single moment, I’m not in a hurry. I want to enjoy the process because you only get one shot at this, one shot at life. For me, that sounds awesome. To be fair, I’ve envisioned myself being the guy and that’s a huge step to take. I’m on my way, for sure. Right now, I’m going to keep doing what I’m doing. My ears are open, my mouth is shut, I’m going to keep going,”

Theory continued on, saying that he has even had conversations with Vince McMahon about being the face of the company. He said:

“Yeah, because I wanted him to know that this was never a second choice for me. This was always the only thing. Nothing against college or stuff like that, you can do that at anytime. For me, I never had a plan B. It was this or nothing. I was so heavy believing in myself at a very young age that, when these guys are at parties in high school, I’m in the gym and I’m training. I finish a job in a warehouse, working 8pm to 8am, I’m tired as hell, but I have to get up and workout because if I don’t, I’m gonna fall off. I’m gonna keep pushing until the next day. It’s that mentality and those little things. Everything that happens in life, happens for a reason. The build up of all these huge moments that have been happening. Could this be the big build-up to get me ready for someone like John Cena? I’m gonna be honest, there are a lot of huge attractions, but I don’t think it gets any bigger than John Cena. Whether you’re a fan or not, you can’t deny his work ethic and what he’s done for WWE. To me, being in that position where I could possibly be the face, just thinking of how much work there is, it’s insane. My hats off to that. It takes a hell of a human, a man, an anomaly, somebody who can pull that off. It’s insane. I feel like my brain will go crazy if I try to think of all this stuff to get there. If I just enjoy every moment and give it my best, it should be a good ride. I’m not saying it’s going to be easy, but I definitely keep my head on straight and keep moving forward,”

Theory has been heavily teasing a potential SummerSlam encounter with John Cena, which WWE themselves seemed to tease last night.

54 mins ago by Amanda Savage