In his post-match interview, ZSJ argued that the current champions are useless before expressing a similar sentiment about NJPW’s media team for cutting his Forbidden Door tease from the Best of the Super Juniors final broadcast.

“No more time for subtlety. American Dragon, old dragon bollocks, can you take some time out of your golfing schedule with the Blackpool Country Club to find out who the best technical wrestler in the world is? Well, I’ll tell you now, darling. It’s f**king me.” 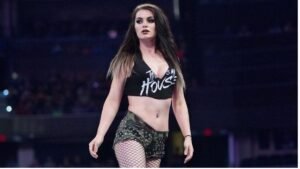 Paige Opens Up About Leaving WWE: ‘It’s Not My Decision'

Also at NJPW Dominion, Hiroshi Tanahashi defeated Hirooki Goto to advance to the AEW Interim World Title bout at Forbidden Door. Tanahashi will face off against Jon Moxley for the gold.