WWE star Big E has sent out a message of thanks to his fans for supporting him after he sustained a neck injury in March 2022.

Big E has been out of action ever since the March 11 episode of WWE Smackdown, when facing the team of Sheamus and Ridge Holland as part of New Day. 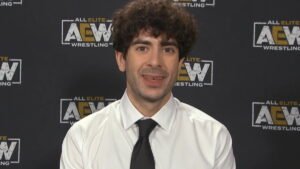 Holland delivered a botched overhead belly-to-belly suplex to Big E at ringside, resulting in Big E landing on the top of his head and fracturing his C1 and C6 vertebrae, effectively breaking his neck.

Since then his injury has healed well, with Big E telling Ryan Satin on his Out of Character podcast that doctors are not worried about his ability to live a normal life.

Speaking on Wednesday’s (October 5) episode of WWE’s The Bump, Big E thanked the fans who have supported him over the past few months, saying:

“I am here to send a message of love and zen. I am thankful now in my older years. I’m very thankful for the beautiful friendships that I have and it is a pleasure to make all of you laugh.

“For everyone who has supported me, for everyone that has asked about my neck, thank you so much. I’m doing well, life is good. I have been incredibly blessed and it’s been a great year for me. So don’t worry about your boy, I am doing well. And hug your friends, hug the people you love.”

Big E has previously noted that he’s due for more scans in March 2023, one year on from his original injury.

For more information on WWE stars’ injuries, check out our WWE injury tracker.

.@WWEBigE sends his love to the WWE Universe for all of their support during his injury recovery. 💕#WWETheBump pic.twitter.com/ioHQf7fu4S