NJPW has issued an official statement regarding WWE’s booking of Karl Anderson for WWE Crown Jewel on November 5, 2022.

With the team of The OC (Anderson, Luke Gallows and AJ Styles) scheduled to face the Judgment Day at the Saudi Arabia show, it cast into doubt Anderson’s ability to defend the NEVER Openweight Championship against Hikuleo on the same date for NJPW.

New Japan President Ohbari has stood by the belief that they correctly negotiated the Anderson/Hikuleo match and that this commitment should stand, despite claims by Gallows and Anderson on Twitter. 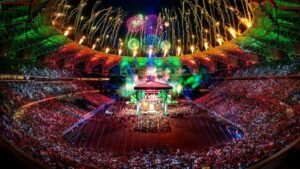 Now, NJPW has made an official statement on their website regarding the insurmountable situation that they’ve found themselves in, saying:

Early morning Japan time on October 20, NEVER Openweight Champion Karl Anderson posted a video on social media indicating that he would not be making his advertised commitment on November 5 in Osaka.

NJPW had announced Anderson’s match with Hikuleo for the NEVER Openweight Championship on October 4. Despite comments from Doc Gallows to the contrary in Anderson’s video, the booking was made through the appropriate channels, and with Anderson’s expressed approval.

However, after the match’s announcement, both Gallows and Anderson would appear on the October 10 edition of WWE’s “Monday Night Raw” broadcast. This led to WWE announcing a match featuring both men for their Saudi Arabia event on November 5, in direct conflict with Anderson’s prior commitment.

NJPW has for the past several days attempted to negotiate with Anderson but has not been met with a response. Should Anderson decide to renege on his scheduled championship match, he will be required to vacate the NEVER Openweight Championship and return the title belt to NJPW immediately.

New Japan Pro-Wrestling holds its champions to the highest standards of professionalism, and sincerely apologises to fans for any disappointment or inconvenience caused by this matter.”

With NJPW hopeful of a resolution, it looks like the ball is in WWE and Karl Anderson’s court as to how they will handle this sticky business situation, with the result no doubt leading to a better understanding of how WWE will do business with other companies in the new Triple H, Nick Khan and Stephanie McMahon era.