Update On How Warnermedia/Discovery Budget Cuts Could Affect AEW

A recent report has provided insight on how the WarnerMedia/Discovery merger, and budget changes could potentially affect AEW.

While there has been some concern within the fanbase that the company might not want wrestling content on its networks post-merger, the likes of Matt Hardy and Tony Schiavone have stated that they believe AEW has a good relationship with WarnerMedia.

Fan concern was fuelled by a recent announcement that AEW’s TV networks, TBS and TNT, are no longer developing new scripted content as a cost cutting measure.

Per Dave Meltzer in the latest edition of the Wrestling Observer Newsletter, AEW’s future with the company entirely comes down to how the company views AEW, as they’re reportedly heavily going after major sports leagues.

It was pointed out that if the company views AEW as a sports property, things will most likely work in the promotion’s favour, as AEW has been performing well for Warner, and have been relatively inexpensive for the network.

AEW draws a younger audience than almost all sports programming, except the NBA and soccer, per the report. It was also noted that Dynamite and Rampage have beaten everything but the NBA in the usual time-slots on most weeks. 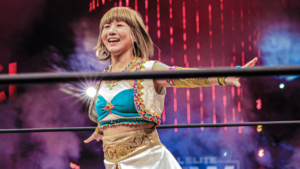 With the key to AEW’s success being a viable TV or distribution deal, the company could take a massive hit if Warner decides it doesn’t want wrestling on the network anymore.

The report also discussed the possibility of an AEW deal with a Discovery-owned streaming service, such as HBO Max. It was ultimately stated that AEW’s future depends on Discovery, and if they want to have their wrestling property compete for the top spot as fewer and fewer things bring in the level of ratings AEW on Wednesday brings in.

Per the report, many top AEW talent deals are up in 2023 and 2024 and the budget to keep them will depend on the revenue that AEW can generate before then. AEW’s TV deal is reportedly up next year, so 2023 is shaping up to be a significant year for the future of AEW.

47 mins ago by Amanda Savage