ROH Episode #409 has a stacked lineup of matches.  The opening match is a 4 corner survival match between Jeff Cobb, Kenny King, Jonathan Gresham, and Dalton Castle.  Next, The Soldiers of Savagery debut on ROH television. Finally, the main event is a Philly Street Fight between LifeBlood and Villain Enterprises. 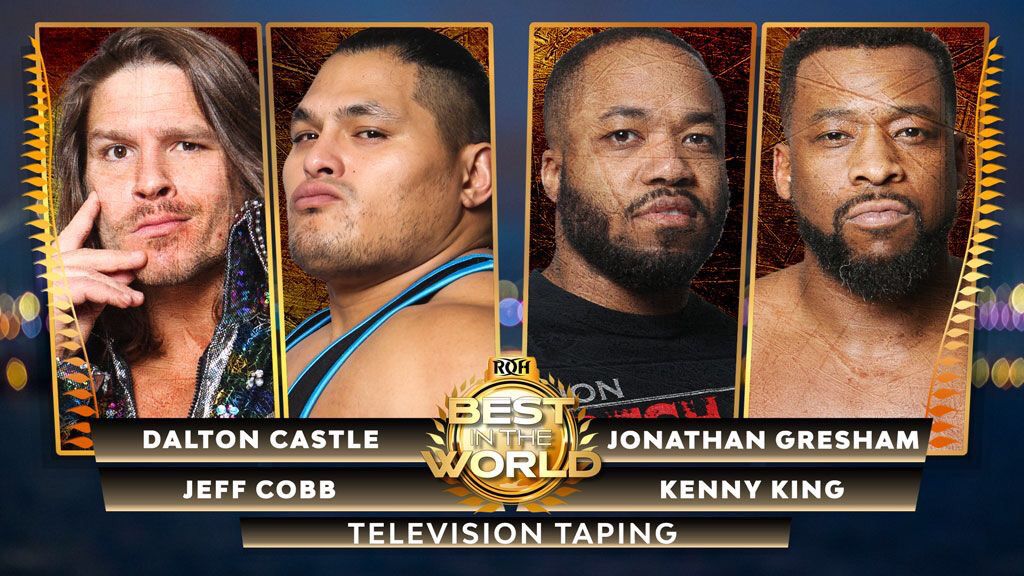 This match was supposed to be every man for himself.  However, early on, Taven and Castle worked like a tag team to gang up on Jonathan Gresham.  Of course, the heels couldn’t work together for long.  This allows Cobb to make the tag.  Cobb dominated both men.  He flung them around the ring like they were nothing.

In an impressive display of strength, Kenny King went for a Blockbuster on Cobb.  However, Cobb catches him into a nasty Jackhammer.  Cobb almost picked up the victory.

Amy Rose, the lady who helped Kenny King when he was pretending to be blind, gave King a high heel shoe.  After Cobb and King fought over the shoe, King hits a kick to Cobb.  Gresham winds up with the shoe.  Gresham nails King and picks up the 1:2:3.

This was a pretty fun match and an ending I didn’t expect.  Gresham cheated to win at Best in the World.  I guess should have seen this coming.  However, later on in the night, Jay Lethal confronted Gresham about him turning heel.  Gresham basically said he’s tired of losing that way.  If you can’t beat them, join them.  This looks to be setting up a full heel turn for Gresham.  This is pretty interesting.  A heel Gresham vs. a face Lethal seems to be the direction ROH is heading.  Gresham sounded confident and smooth in his promo.  Thumbs up to both segments.

In Ring Debut for Soldiers of Savagery

SOS jumped Primal Fear during introductions. 47 seconds later, a double Chokeslam is the move for the win.  ROH is putting over the SOS as a team to be reckoned with.  This team has promise.  We haven’t heard them on the mic yet.  However, so far, they have impressed in all their segments.

This looks to be a potential team to be a serious contender in the tag team ranks.  ROH needs some new blood in this division.  Khan and Moses aren’t going to be doing flips and dives, but they should be fun in some brawling style matches with the likes of the Briscoes, The Kingdom, Villain Enterprises, and The Bouncers.

At Best in the World, Flip Gordon turned heel, or tweener at the very least, and joined Villain Enterprises.  The turn was very reminiscent of when Marty Scurll joined the Bullet Club/Elite.  Originally, Gordon put on a LifeBlood shirt and appeared to accept LifeBlood’s invitation.  The lights went out and Marty appeared on the screen. He introduced the intern, the understudy, the mercenary, Flip Gordon.  The light came back on and Gordon took out one of LifeBlood with a Superkick and escaped the ring.

Therefore, LifeBlood called out Villain Enterprises on tonight’s show.  Villain Enterprises came out to the ring.  Scurll said it’s not going to be a title match.  However, it can be a Philly Street Fight.  He, then, gave Gordon the night off and sent him to the back.

This match was a lot of fun.  It had all the shenanigans of a typical tornado style, no disqualification tag match.  There were lots and lots of kendo sticks.  It was full of fun spots.  Bandido hit a super-hurricanrana on PCO from the top rope through a table on the floor.  Brody King took a back fall through 6 chairs in the ring.  One of the best spots came when Haskins locked in a Sharpshooter on Scurll.  Williams started hitting Scurll with a Kendo Stick while he was trapped in the submission move.  He, then used the kendo stick to lock in a cross face for a double submission move.

Not surprisingly, Bandido had some serious highlight reel moves in this match.  He hit a moonsault onto the other 5 men.  After he bounced off them, he nearly lawn darted himself into the floor.  He was very lucky not to have been hurt.  He hit a 21 plex slam on PCO through a chair in the ring.  The finish came on one of the craziest moves in the match.  Bandido got Scurll up on the top rope.  He lifted him into body slam position and then hit a flipping fall-away slam from the top rope through a table in the ring.  Bandido is special.

This show gets a 4 out of 5.  The main event was a lot of fun.  If you have turned away from ROH and haven’t been watching, this is a week to tune back in.  This main event was reminiscent of the best of ROH from the last few years.  There were a ton of great spots and the story made sense.  There is a reason these teams are fighting with such force.

Each week, I call for ROH to focus on its stars.  ROH doesn’t have the star power it used too.  However, Bandido, Jeff Cobb, Dalton Castle, Marty Scurll, Brody King, and PCO are some of the biggest stars they have right now.  Yet, this show still was able to use those stars to put over the new batch of guys.  Mark Haskins, Tracy Williams, Jonathan Gresham, and Soldiers of Savagery all looked great because of solid booking.  The first 3 got the rub by being in the matches with the best ROH has to offer.

ROH needs more weeks like this.  Next week is shaping up to be just as good.  The Briscoes face off against RUSH and Dragon Lee.  Since ROH gave away that match on its website, a lot of fans have already seen it.  It is worth tuning in for.