Ahead of the release of his ‘Not Found 2’ EP this Friday, Lio Rush spoke exclusively with Sanchez Taylor for WrestleTalk.com about his respect for Sasha Banks.

In a recent interview with Wrestling Inc, Rush noted that he would be interested in a potential music collaboration with Banks in the future.

Speaking with WrestleTalk, Rush noted that Banks has always supported his music projects. Putting out an open invite, Rush said:

“Me and Sasha are cool. We didn’t talk much as she was on SmackDown when I was on Raw, but I do remember seeing her a few times when we were on tour and we’d say what’s up, and she’d always support with a repost. I always thought the relationship was pure mutual respect.

“I’m sure there’s some talent there with Snoop being her cousin and she’s incredibly cultured when it comes to the music world and the fashion scene. Sasha or anybody else who wants to make a song, I’m all about making good music and creating cool moments for the fans. The invitation is open.” 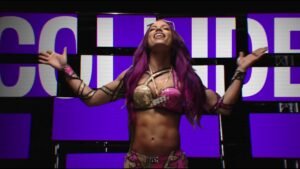 Lio Rush To Work With Sasha Banks On Music Project?

Sasha Banks and Naomi were both suspended by WWE after walking out on the May 16 WWE Raw taping. Several sources have indicated that Banks has been released from her WWE contract.

Noting that it’s really hard to tell what’s going on from the outside, Rush said:

“I think it would be easy to say of course (on if he knows how they feel), but at the same exact time you have no idea what’s going on. You just don’t know. I feel like it is an easy cliché to compare someone else’s experience with your own, but the reality of the situation is not everyone’s experience is the same.

“It’s hard to even try to guess or talk about it because at the end of the day you really don’t know because you’re not in it. I just try to pray for the people that I have some kind of connection with and hope that everything is good, and continue to move on with what I have going on.”

Also in the interview, Rush revealed that he’s currently working on a track with IMPACT star Chris Bey, which you can read more about right here.

Keep an eye on our exclusives page for more quotes from our interview with Lio Rush, ahead of the release of his Not Found 2 EP on Friday.

If you use these exclusive quotes, or any portion of them, please credit WrestleTalk.com and link to this page.

You can listen to the interview below:

6 mins ago by Dave Adamson

Backstage Report On Morale At Royal Rumble Without Vince McMahon

Which McMahon’s Theme Song Did Cody Rhodes Have On Repeat?