WOS Wrestling Returns To ITV With A Bang

British wrestling returned to terrestrial television in the UK last night as WOS hit ITV screens for the first time in 30 years.

WOS Executive Stu Bennett – the former Bad News Barrett – opened the show in a segment with WOS Champion Grado, letting him know in no uncertain terms that the time for “jokers and clowns” was gone. Bennett then made a five-way elimination match between Justin Sysum, Rampage, Adam Maxted, Crater and Sha Samuels to kick off the action, with the winner receiving a title shot at Grado in the main event.

The chaotic bout ended in controversy. Superhero Sysum seemingly won the match via count out, only for referee Steve Lynksey to turn around and see that Rampage had also beaten the count (which he had done with help from the eliminated Samuels) without him realising. Unfortunately, Lynskey had already called the bell to end the match and declared Sysum the winner.

Unhappy that an injustice had occurred in the first match of his stewardship, Bennett declared both Sysum and Rampage as the winners and made the main event a three-way, stacking the odds against Grado. 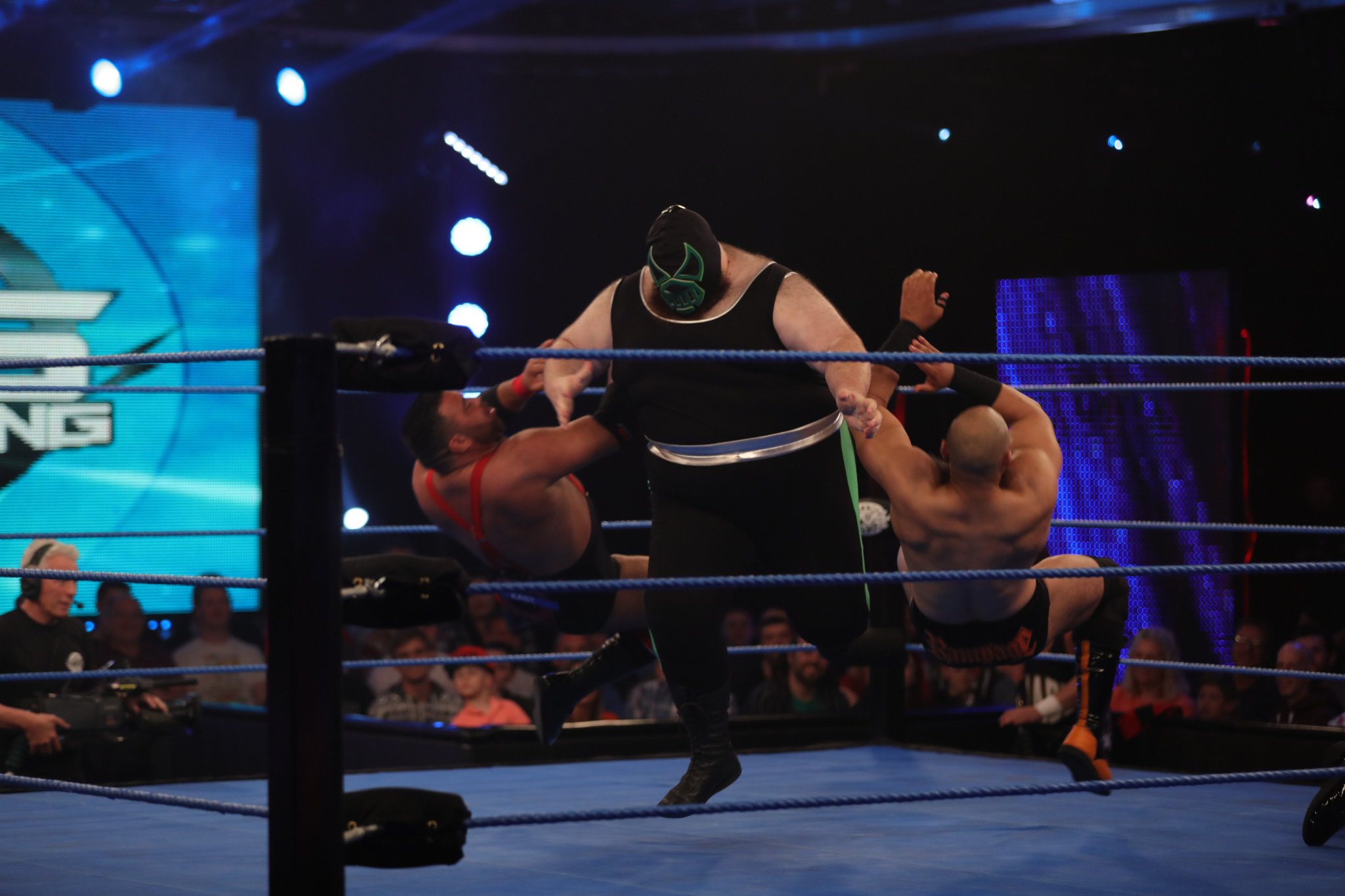 The second match was a treat for followers of New Japan and the independent scene when the sensational Will Ospreay battled British Bulldog Jnr. in a cracking contest. The two held nothing back in a high-octane encounter, in which Bulldog scored the duke following an impressive powerslam from the top rope. Old school wrestling fans that had not seen British action since the days of Daddy and Haystacks surely stood up and took notice of this one.

It was announced that an eight-team tournament would take place to crown the first ever WOS Wrestling Tag Team Champions, with the first match pitting Kip Sabian and Iestyn Rees (Alpha Bad) against Martin Kirby and Joe Hendry. The latter had his own specially-penned WOS entrance music, which went down a treat with the crowd. Hendry impressed in the early going but an accidental collision with Kirby changed the course of the bout.

When Hendry later went to tag his partner, Kirby dropped off the apron and walked off, leaving Hendry to the wolves. Despite a gallant effort, Hendry ultimately succumbed to a powerbomb / neckbreaker combo from Alpha Bad. It will be interesting to see how the Hendry and Kirby storyline pans out over the coming weeks. 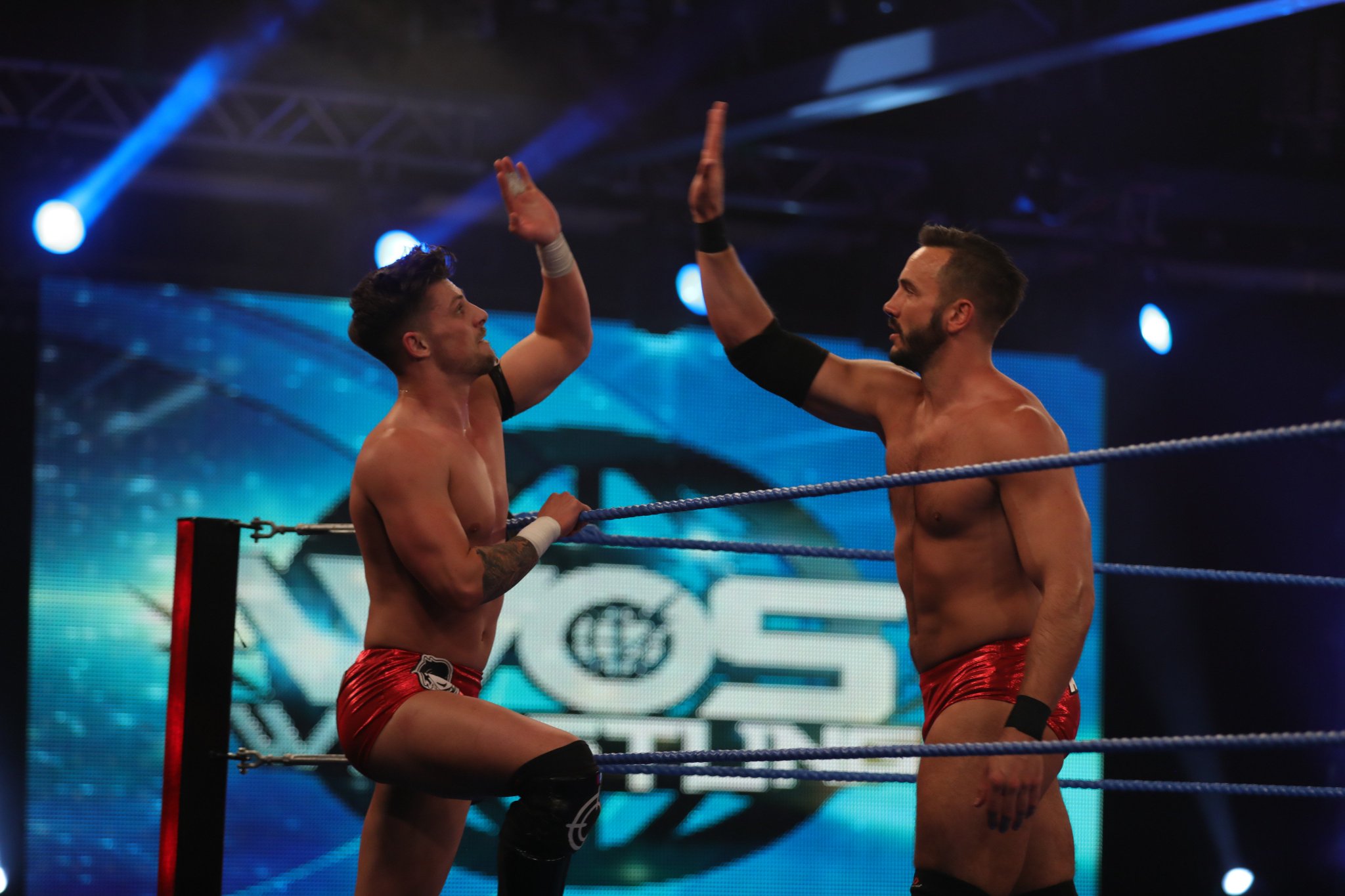 The three way main event was full of drama. Rampage, flanked by cronies Sha Samuels and CJ Banks, looked dominant throughout, until crowd favourites Sysum and Grado hurled him out of the ring and went at it themselves. Grado brought levity to the proceedings, toying with Sysum as Bennett looked on unimpressed from the commentary booth.

When Rampage made it back into the match he made his presence felt, tossing Sysum to one side when he appeared to have the match won with an impressive 450 then drilling Grado with his implant DDT finisher to score the win and the title. A huge changing of the guard to end an extremely entertaining one hour show that absolutely whizzed by.

British wrestling returned to television with a bang, putting its best foot forward and delivering a show that should have appeal not just for wrestling fans but for a wider mainstream audience as well. A perfect balance between solid wrestling, entertainment and pizzazz, the show was exactly what it needed to be in the time slot.

5 days ago by Liam Winnard

Natalya Fires Shots At Will Ospreay

Report: ‘About Half The Crowd’ Left During AEW Rampage Taping

7 mins ago by Amanda Savage

30 mins ago by Liam Winnard

29 mins ago by Amanda Savage