Ring of Honor’s second pay-per-view under the helm of Tony Khan, Death Before Dishonor kicks off tonight (July 23) with a shift in alliances.

Appearing on the Zero Hour alongside the former Tully Blanchard associates of Brian Cage and Gates of Agony, Prince NaNa pledged to guide them to success and came through on his promise.

Their trio emerged victorious after a decided victory over Tony Deppen, Alex Zayne and Blake Christian. 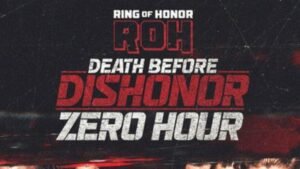 Not only will their trio be apart of Prince Nana’s The Embassy, he also pledged to accompany Jonathan Gresham to the ring for his match against AEW and Blackpool Combat Club star, Claudio Castagnoli.

When the big ROH World Championship Match kicked off as the opener for the pay-per-view however, no Nana was in sight – at first, joining ringside after the action has kicked off.

You can check out the entire card for ROH Death Before Dishonor by clicking here.

ROH Death Before Dishonor is set to feature a stacked card including the following already announced: